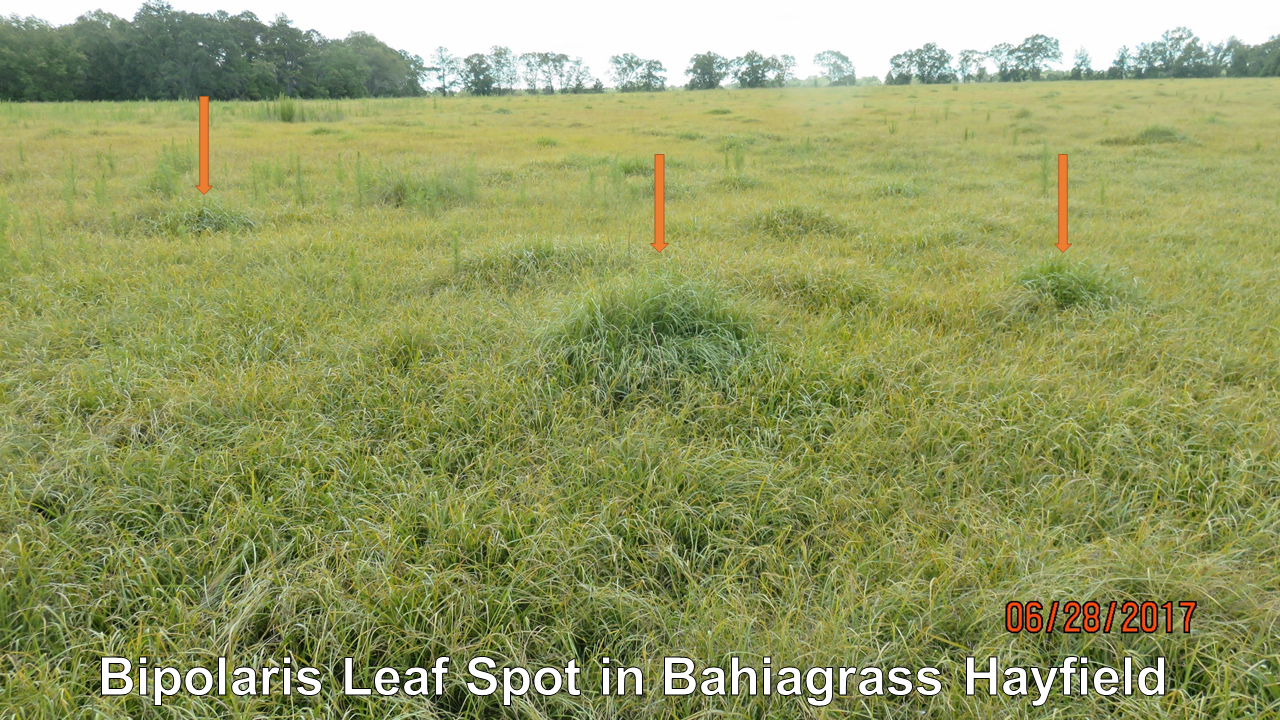 Pensacola bahiagrass hayfield that was yellow and stunted at the end of June near Marianna, FL. The orange arrows point out green clumps of grass where the fire ant mounds were located. Photo credit: Doug Mayo

At the end of June, a Jackson County,FL rancher noticed something strange about his hay field.  The field was gradually turning yellow and was not growing well.  Typically plants turn yellow as the result of a nitrogen deficiency, but this field had been fertilized for hay production.  Upon inspection, the leaves were yellow with dark brown spots, as in the photo below.  There were also green clumps scattered across the field.  The green clumps of grass were growing over fire ant mounds across the field.  Pensacola bahiagrass commonly gets Dollar Spot fungus that causes the tips of the leaves to wilt and turn brown or senesce.  This infection, however, was much different than Dollar Spot, so Dr. Ann Blount, UF/IFAS Forage Specialist, was contacted to set up a field visit.

Dr. Blount had never seen this type of widespread fungal infection in Pensacola bahiagrass either, so samples were collected and sent to the UF/IFAS Plant Disease Diagnostic Clinic, in Quincey .  As it turns out the field was infected with Bipolaris Leaf Spot (Bipolaris micropa) or leaf blight.  In older publications, leaf spot was referred to as helminthosporium.  Bipolaris leaf spot is fairly common in Bermudagrass hayfields, but is not at all common in bahiagrass, but there have been documented cases of bahiagrass infestation in the Southeast.  Bipolaris can also infect small grains, and turfgrasses under the right conditions.

The Plant Diagnotic Report provided the following information from literature on this particular fungal disease:

Bipolaris micropa may cause extensive damage when the pathogen attacks crown, stolons or rhizomes.  This fungus can grow saprophytically on dead tissue and sporulates profusely when dry debris is re-wetted. During periods of cool, moist weather fungal spores may be spread to healthy leaves by wind, rain, irrigation, water, equipment or people. Moisture films on leaf surfaces are necessary for infection mainly under cool and wet conditions.

June 2017 was not that cool, but it was certainly very wet. The Marianna FAWN station located a few miles from this field recorded 11.5″ of rain that fell on 19 of the 30 days in June.  Cutting and drying hay was extremely challenging in June, so this particular hay field was much more mature than normal. Combine constant wet conditions with very mature grass, and the conditions were right for fungal disease build up.  Even so, this just does not normally occur in bahiagrass fields.

In addition to the diagnostic disease sample, a diagnostic soil sample was collected from several areas suffering from the greatest infection.  The following were the results of the soil test report.  The pH at the site was 5.6, above the target pH for the crop, so liming was not an issue. There was a considerable deficiency in soil potassium, however. 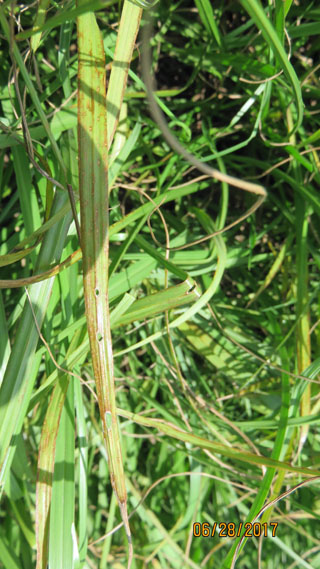 Nitrogen (N) fertilization is the key nutrient required for forage plant growth. Adding nitrogen fertilizer will boost yields of all types of crops. Put another way, “Nitrogen is the gas that makes grass grow.”  Potassium (K20), also commonly referred to by farmers as potash, on the other hand is an essential nutrient, but the yield boost from K20 fertilization is more subtle.  Hence, there is a temptation to simply apply nitrogen fertilization to hay fields and annual forages to reduce costs, but there can be a hidden cost from repeated use of this practice.

Nitrogen is very water soluble, so when we get into wet seasons with heavy rainfall and saturated soils, the nitrogen fertilizer can be washed away from plant root zones.  While not as soluble as nitrogen, potassium can also be washed below the root zone with heavy rains or continuous rainfall.  In general, potash will remain in the root zone longer than nitrogen, but in periods of heavy rainfall, like the month of June, it can become very short.

The immune system is one of essential systems in plants relies on an ample supply of potassium.  When there is a deficiency, plants cannot fight off challenges like fungal diseases.  Such is the case in forage grasses and annual forages with Bipolaris leaf spot (Bipolaris micropa).   Dr. Jim Marois, retired UF Plant Pathologist, once told me, “Leaf spot is normally like a common cold for plants.  Under normal conditions plants can fight if off and prevent major issues.  But if a plant is under major stress, the cold becomes pneumonia, and the plants suffer significant yield loss.”  Certainly a serious potassium deficiency can stress the immune system of forage plants.

This also helps explain why the clumps grass over the fire ant mounds were green and more vigorous. The fire ants import nutrients from the surrounding area as they haul in feed for the ants in the mound.  They also aerate the soil to reduce soil compaction in the root zone.  So in this case, the ant mounds provided enough potassium to boost  the health of the plants surrounding their mound, which allowed them to fight off the fungal infection.  At least in this case, the fire ant mounds were good.  Incidentally, fire ants are also the number one biological control of armyworms, so they are not all bad.  I do understand their mounds are really hard on hay equipment, but it was certainly interesting in this case.

For every ton of hay or baleage harvested, there is a net loss of soil nutrients that is exported to other locations where the harvested forage is actually fed. In general, harvested grasses and annual forages need at least a 4:1:3 ratio of N:P:K.  If you fertilize with 50 lbs. of N, then at least 37.5 lbs. K20 should be added.  In reality though, based on research trials, the actual removal of N and K are nearly equal, so  it is essential to soil test annually for both phosphorous (P) and potassium (K), to ensure the plants are getting the balance fertilization needed to maintain a healthy stand.

This was a very unique situation.  Biploaris leaf spot is a much more common problem with small grains and Bermudagrasses than bahia.  Dr Blount has been working with bahiagrass for over 40 years, and myself for almost 30 years and neither of us had run into this situation before.  You might say this was a perfect storm for fungal growth with continuously wet fields, frequent rainfall, very mature grass, and low soil potash.   There are no fungicides registered for bipolaris control in forages, so the best control options are prevention.  This situation serves as a reminder of why it is important to diligently follow the standard recommendations for quality hay production, even in bahiagrass fields:

For more information related to this topic, use the following publication links:

Getting the Most out of Bahiagrass Fertilization