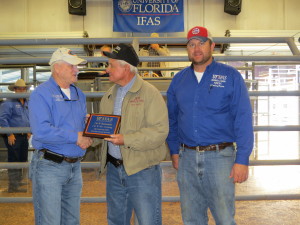 The Florida Bull Test Sale was held on January 17, 2015 at the North Florida Research and Education Center in Marianna, FL. Of the 102 bulls originally consigned to the test 56 bulls were on offer. Only bulls meeting specific benchmarks were eligible for the sale. In addition, bulls were inspected for structural soundness and disposition and passed a breeding soundness exam to qualify for the sale. Additional information, such as actual performance data, expected progeny differences (EPDs), and carcass ultrasound data was available for bull buyers to aid in the selection of excellent quality bulls to purchase.

For those planning to consign bulls for the 2015-2016 test feel free to visit the web page at http://nfrec.ifas.ufl.edu/fl_bull_test , for details pertaining to the nomination deadline.