The University of Georgia

Summer annual grasses are important forage crops in the Southeast. They have a significant fit in our forage systems to fill in the summer forage gap in the Fescue Belt and as an emergency forage crop for dry summers or bare ground. They also fit well in situations where perennial warm season grasses are not desired or do not have fit the circumstances. Many producers use summer annuals for high tonnage and quality. In fact, the seed industry has certainly taken note of the importance of summer annuals. In the last few years, it has gotten a lot more difficult to pick a summer annual forage because of all the different species, new varieties, and limited information (not to mention the erratic seed supplies because of drought issues). It has become confusing. In this month’s article, we’ll step through some of the considerations when selecting a summer annual forage.

What is the Right Species?

There are at least 10 different summer annual grasses that could be used as forage crops in Georgia. In general, these summer annuals do not make good hay crops in our environment because of their slow drying rate. However, a few of these species play a role as a grazing and/or silage option and are recommended for use. Those recommended species are divided into two categories: 1) pearl millet and 2) the sorghum family. 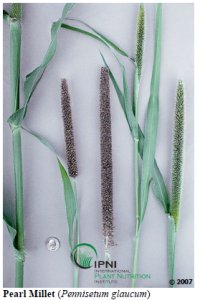 Pearl Millet originated in Africa and is the most widely planted summer annual grass in Georgia. This tall growing, erect annual grass produces several stems from a central plant. It tillers out more aggressively and generally recovers more rapidly after grazing than those in the sorghum family. Consequently, pearl millet is generally the best choice for grazing.

Millet produces good quality grazing from June through August. If properly grazed to avoid advanced maturity stages, the range of total digestible nutrients (TDN) can be expected to be 52-58%, while crude protein (CP) will range from 8-11%. Millet planted in spring (April) should be ready for grazing 30 – 40 days after planting and should be productive for 80 – 110 days. However, most of the production will be during the first 60 days of the life of the stand. The grazing supply can be more stable over the summer by making 3-4 plantings staggered by about 2 wks each. Well-fertilized millet should carry three to four stocker cattle or two to three mature cows per acre during the first 60 days. Lower the stocking rates during the last part of the grazing season to compensate for the reduced growth rate and lower quality.

Pearl millet is also less variable from year to year. During the last 10 years, the average yield of pearl millet in the variety trials in Griffin and Tifton was approximately 9,000 and 16,000 lbs per acre, respectively (Figure 1). In both cases, the year-to-year variability was approximately 25%. Generally, pearl millet holds up better under drought stress than the other species.

All of the summer annuals have the potential to accumulate nitrates. However, pearl millet does not have the added risk of prussic acid toxicity whereas those in the sorghum family do have that risk.

Members of the sorghum family generally produce more tonnage than pearl millet, except during prolonged drought. Figure 2 shows the yield of sorghum x sudangrass hybrids in the variety trials in Griffin and Tifton during the last 10 years. The average yields were approximately 10,200 and 16,600 lbs per acre, respectively. In both locations, the year-to-year variability was approximately 35%, which is substantially more variable than pearl millet and likely due to an increased susceptibility to drought.

Still, the sorghums are more drought tolerant than corn. In fact, forage sorghum is a good alternative to corn silage, especially when one’s crop fields are not irrigated. Members of the sorghum family generally produce forage that is slightly higher in nutritive value (TDN ~53 – 60% and CP of 9 – 15%). Like corn silage, forage sorghum produces a substantial amount of grain. However, the yields and quality are generally less than corn silage in irrigated fields or under adequate rainfall. Forage sorghum really only works as a chopped silage product. If baled silage is desired, sudangrass and sorghum x sudangrass hybrids work very well. These species produce relatively little grain, so it is generally best to harvest them before the seed head fully develops.

Photoperiod-sensitive sorghum x sudan and forage sorghum cultivars are available. These varieties are capable of sustaining more consistent growth over a longer-growing season because they remain in a vegetative stage late into September (until daylength is less than about 12 hours and 20 minutes). This trait may negate or lessen the need for staggered plantings. Otherwise, these varieties are generally managed (planted, fertilized, etc.) in the same way as conventional cultivars.

Lots to Choose From

In the last few years, a lot of new summer annual forage varieties have come out on the market. Many of these new varieties have been evaluated in the Georgia Statewide Variety Testing Program for only one year or they may be so new as to have not yet been submitted for testing. In addition, seed supplies have been severely limited because of major drought issues in areas of the U.S. where summer annual forage seed is produced. Consequently, the seed supplies of our better or at least better known varieties often are depleted quickly.

When selecting a variety, compare the performance of the available varieties against one another using the yield comparison trials in UGA’s Statewide Variety Testing Program (http://www.caes.uga.edu/commodities/swvt/). The data are published annually in the “Soybean, Sorghum Grain & Silage, Summer Annual Forages, and Sunflower Performance Tests.” These reports are available through your County Extension office, on the Variety Testing program’s website, or via the links provided on www.georgiaforages.com.

Additional information about summer annual forages can be found by visiting our website at www.georgiaforages.com. If you have additional forage management questions, visit our website or contact your local University of Georgia Cooperative Extension office by dialing 1-800-ASK-UGA1.

The author wishes to acknowledge and express their appreciation to Drs. Don Ball, Carl Hoveland, and Gary Lacefield, authors of Southern Forages, 4th Edition, and to Don Armstrong of the International Plant Nutrition Institute for their willingness to allow the reproduction and use of their copyrighted (2007) photographs of forage species. More information on how to order a copy of Southern Forages is available at http://www.ipni.net/.