Recently USDA released the May 1 Hay Stocks numbers. This is an important statistic because it gives an idea of the ending hay inventory for the US. The next hay statistic that will be reported is the December 1 Hay Stocks which provides an estimate of the hay stocks entering winter.
The May 1 hay stocks was the lowest on record at slightly more than 14 million tons. The next lowest occurrence happened in 2007. Before that, we have to go back to 1997 and 1989 to find numbers even remotely close to the 2013 number.
In addition to the lowest total number, the May 1 number is also the second-lowest ever in terms of tons of hay per beef cow. So, even though beef cow numbers have declined in recent years, hay supplies are still remarkably tight compared to the number of cows that consume the hay. This situation only serves to highlight the importance of reducing stored forage needs during the coming year. 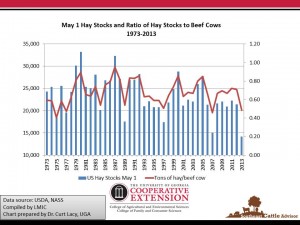