Alfalfa is considered the “Queen of Forages” because of its high nutritive value. Alfalfa also has high N-fixation capacity meaning that no nitrogen fertilization is needed for its production. Alfalfa historical high dry matter yields (6-12 tons/acre), versatility of products (hay, greenchop, silage, haylage), and almost year-long forage production, from mid/late March to late November, makes it a great alternative for Florida. Because of its high nutritive value, alfalfa is often commercialized as hay for the dairies and horse industry in Florida. Most of the Alfalfa in USA is produced in the North- and Mid-West; as a result, the transportation cost to bring alfalfa hay to Florida is high. At the same time, alfalfa hay has a strong market in southeast USA. Florida has approximately 119,000 dairy cows and a well-developed horse industry that generates $6.5 billion annually. Producing local alfalfa hay is an opportunity for growers in southeast USA. Reduced transportation costs compared to alfalfa transported from mid-west will give local growers a potential advantage to supply the local market. Some of the opportunities and challenges to achieve this goal are discussed in this article.

There are many considerations to establish an alfalfa stand and most do not differ from other winter forage crops, thus review the University of Florida extension publications “Winter Forage Legume Guide” (http://edis.ifas.ufl.edu/pdffiles/DS/DS12700.pdf) and the “2014 Cool-Season Forage Variety Recommendations for Florida” (http://edis.ifas.ufl.edu/pdffiles/AA/AA26600.pdf). Current alfalfa commercial varieties do not tolerate flooding, meaning that a well-drained site needs to be selected to establish an alfalfa stand. In order to establish a successful alfalfa stand, the pH needs to be maintained between 6.5 and 7.0. A soil test well in advance of the establishment day will indicate if pH corrections with lime are needed as well as the fertilization requirements with phosphorus, potassium and micronutrients. For Florida production, high-yield disease/pest resistant improved varieties with a fall dormancy >8 are preferred. There are many options in the market for the North West States, however, not many of them has been tested under Florida conditions. Seeds need to be inoculated prior of planting in order to have the symbiotic nitrogen fixation with beneficial bacteria. Most commercial varieties nowadays have pre-inoculated seed (coated). If seeds are not pre-inoculated, buy the right inoculant for alfalfa and follow the directions to use in the label. Also inoculant adhesives can be used to ensure the inoculant sticks to the seed. Inoculants are relative cheap and essential for N-fixation, eliminating the need of nitrogen fertilization.

Due to his high N-fixation, alfalfa is the perfect partner for rotations with corn silage; reports from mid-west have indicated that a full corn production could be obtained without nitrogen fertilization. However, these have not been investigated under Florida conditions, where the soil type and weather patterns may change those estimates. Additionally, due to its production peak in the fall-winter and winter-spring transitions, alfalfa can be use in mixtures with bermudagrass. Also, high yields have been reported in mixed pastures. Special attention should be put in the management to supply enough nutrients for grass and legume as well as the harvesting frequency and height to ensure survival of the mixture.

Warm weather during the summer associated to high relative humidity commonly found in Florida Peninsula and in the Southern Coastal Plains increases disease pressure on the alfalfa crop. In many cases, soil fertility is also inadequate and cultivars used are not adapted to local conditions. Combinations of these factors reduce the potential for alfalfa production in southeast USA as compared to North- and Mid-West States. One way to overcome the pest and disease pressure is to breed alfalfa varieties adapted to local conditions. Fall dormancy, for example, is a critical trait that describes the alfalfa growth during the fall due to decreasing temperatures and day length. Fall dormancy scores range from 1 to 11, with lower numbers representing cultivars that exhibit less growth in the fall. Warmer regions should target non-dormant alfalfa varieties with fall dormancy > 8. Currently, several non-dormant alfalfa varieties are being tested at North Florida Research and Education Center as part of the alfalfa breeding program of the University of Florida. 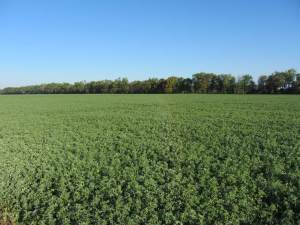 Preliminary data collected under rain fed regime indicated that an average of 1180 lbs./acre of alfalfa hay can be harvested every 5 weeks (Table 1). Harvesting at two inches resulted in better yield (1224 lbs./acre) if compared (table 2) to harvesting at four inches (1136 lbs./acre). The cumulative annual yield under rain fed regime for two inches is 6100 lbs./acre, compared with cutting with the yield at four inches of 5683 lbs./acre.

Under irrigation, alfalfa yield potential in North Florida is much greater. In an extension project, the forage group from NFREC has been measuring the yields in a commercial alfalfa field in Jackson County, Florida. The best yielding varieties averaged per cut almost 1,800 lbs./acre with a cumulative yield in a 12-month period of 14,390 lbs./acre. Harvest occurred every 30 days. It is important to mention that the fertilization program to maintain this alfalfa productivity requires fertilization after every cut replacing the extracted nutrients.

The data presented here is preliminary and refers to a 12-month period. A decline in the alfalfa productivity has been noticed and the stand will not persist for 3-5 years as observed in the Mid-West alfalfa. Considering the price advantage and the growing market in Florida and SE USA, it may be worth to grow alfalfa, even for a less period of time (1-2 years). Keeping establishment costs low, growing the right variety, having a solid fertilization program, and marketing well the alfalfa hay are key for a successful alfalfa hay producer.

View all posts by Jose Dubeux