On May 8, 1914, President Woodrow Wilson signed the Smith-Lever Act into law, establishing the Cooperative Extension Service. In the 100 years that have elapsed, extension agents and educators at the national, state, and local level have been leaders in an epic agricultural revolution. In a 2010 study entitled “Persistence Pays: U.S. Agricultural Productivity Growth and the Benefits of Public R&D Spending,” economists concluded that there have been $20 in benefits for every $1 spent on agricultural research and extension. Do you know of any other (legal) endeavor that has a return on investment of 20 to 1?

Publicly funded research and extension efforts have been major contributors to improvements in nearly every aspect of forage and livestock production in the U.S. Our systems now produce the safest, most nutritious, and most cost-effective milk, meat, and fiber ever known to mankind.

However, just because this fact is true does not mean it will stay true. What happens when a society becomes complacent? Ask the Britons, the Greeks, the Mayans, the Romans, or the Ottomans. Outsized budget deficits, an increasingly global economy, and an American public that has rapidly become disconnected from agriculture are factors that seem to have induced complacency and negligence when it comes to fundamental ag research and extension efforts.

Public funding for agricultural research and extension efforts is nowhere near what is needed to replicate past successes. Total agricultural research and development spending in the U.S., including both public and private sources, has sustained only marginal annual increases. However, the funding priorities have drifted away from solving day-to-day management problems, particularly in the forage-based livestock sector. Education and extension efforts are even harder hit. The proportion of public agricultural research and extension spending that supports extension efforts is currently less than 28%! Federal funding for Cooperative Extension in the FY2014 budget was slightly improved from FY2013. Yet, if adjusted for inflation, federal funding of the Smith-Lever Act is currently 30% less than it was in FY1995 (Figure 1). This decline has been even more severe in some states where cuts in state and local funding have decimated or eliminated many Extension programs. 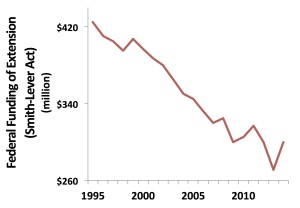 Figure 1. Trends in federal funding for the Smith-Lever Act since 1995, adjusted for inflation.

These declines have hit the forage and livestock industries hard. Between 1984 and 2009, there has been a 60% reduction in the number of forage/livestock researchers and a reduction of nearly 40% in the number of forage/livestock teachers in our universities (Figure 2). Just since 1998, there are over 30% fewer forage extension specialists in the U.S., and projections indicate that there will be another 30% decline by 2018. In addition to the lack of federal and state funding for these efforts, the near absence of forage-specific grant opportunities has prevented the training of the next generation of scientists and educators. 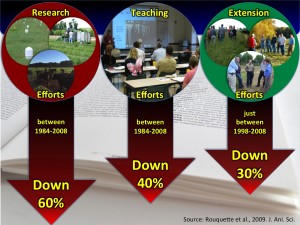 Meanwhile, many countries and corporate industries in other regions of the world are ramping up their funding of forage and grassland research and extension. Consequently, they are dramatically closing the gap on our advantage. Last September, I had the opportunity to learn more about their successes by attending the International Grassland Congress, which is held every 3-4 years. The quality and quantity of the research and extension efforts in many of the “developing” countries was absolutely staggering. Their research and extension teams had developed systems that doubled or tripled output using what we would consider basic inputs (e.g., fertilizer, improved varieties, better grazing management, improved animal genetics, supplemental nutrition, vaccinations, comprehensive animal health programs, etc.) with minor adaptations for their soils and climate. To give it some perspective, it was like seeing all of the advances that USDA, land-grant universities/Extension, and the private sector have made in American agriculture over the last 100 years put to immediate effect. Clearly, they are serious about making fundamental changes! It was a rude awakening to see how dramatically these developing countries are catching up with the sophistication of modern U.S. forage and grassland management.

Do not take these comments as necessarily advocating for more taxes to pay for this investment. In fact, one could argue that the exclusive use of taxpayer funds in the future may not be in the industry’s best interest. Dependence upon taxpayer funds may result in an over-emphasis on “hot button” political issues that could dilute attention given to fundamental research and extension needs. The US is now more urban than rural, and that is a fundamental difference from when Senators Hoke Smith (GA) and Asbury Lever (SC) introduced the Cooperative Extension concept in 1914. Since our society is increasingly removed from agriculture, there is a great risk that some influential individuals and lobbyists who desire to harm the industry rather than protect and develop it may be given authority over how funds are spent.

Complete dependence upon private-funded initiatives has its own sets of risks, too. I’ve been part of Cooperative Extension for nearly 15 years and have had many occasions where my presentations of data did not back up the salesmen’s message. There have been more than a few threatening letters from lawyers and more wagging fingers in my face than I care to remember. Were it not for the marriage of Extension with academia within Land-Grant Universities, I could not have confidence that I could separate fact from fiction with impunity. My bosses expect me to separate fact and fiction, regardless of whose toes I step on or which “snake oil” salesman I upset. The unbiased nature of peer-reviewed science and extension information engenders trust. Relationships built upon trust are the keystone to assuring that new technologies and practices are worthy of adoption, thus these critical prerequisites ensuring there is a return on the investments made in agricultural research and extension.

The forage-based livestock community needs to have a serious collective dialogue about the future of investing in research and extension efforts. Who will pay for it? Can we continue to expect taxpayers to pay for agricultural research and extension efforts? Who will set the priorities? Will it be producer and market-oriented? Or will it be dictated by special interests?

If we are to solve real-world forage and grassland management issues in the future, the inevitable conclusion is that private funding mechanisms need to be developed to assist in funding research and extension efforts. The most straightforward approach would be to establish forage-focused research and development commissions (RDC). These statutory authorities would need to be enabled to collect “user-fees” or “check-off” funds at some predetermined percentage of forage and livestock products sold. In some of the many developed and developing countries that have established RDCs, taxpayer revenue matches or adds a proportion to the “check-off” funds that are collected. However, the key to making this work is that these statutory commissions must be supervised and directed by a coalition representing producers, agribusinesses, and scientists/educators who are dedicated to solving real-world management problems in the forage-based livestock sector. Furthermore, it would be important that these RDCs exist and function within specific regions and not be defined by artificial geography. Some states in the U.S. have already established state commissions, and that is a great step. Care should be taken, though, to ensure cross-pollination of ideas across state lines where producers on both sides of a river or some man-made boundary can benefit.

At the end of the day, a better model than such outlined here may emerge. The ideas here are intended merely to plant the seed for discussion. We have inherited a great legacy of improvement and impact. Yet, we need to rethink how we fund agricultural research and extension so that we maintain that return on the investment during the next 100 years.