Herd expansion is a thought that is on many cattlemen’s minds.  Most are considering if they should expand and by how much.  Others are questioning if expansion has already begun, and if it hasn’t, when it will.

In recent weeks beef cow slaughter as compared to last year has dramatically fallen.  In fact, when compared to 2012 year-to-date numbers, 2013 is running about 4 percent less for the year.

So what does this mean for herd expansion and cattle prices?  According to UGA forecasts,  beef cow inventory should be about 28.9 million head as of January 1, 2014 (Figure 1).  This would be a decline of about one percent from last year and would indicate that herd expansion is nearing but not quite here. 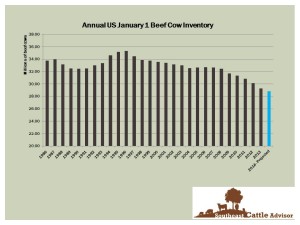 All of this should be encouraging news to cattlemen concerned about expansion and implications for prices.